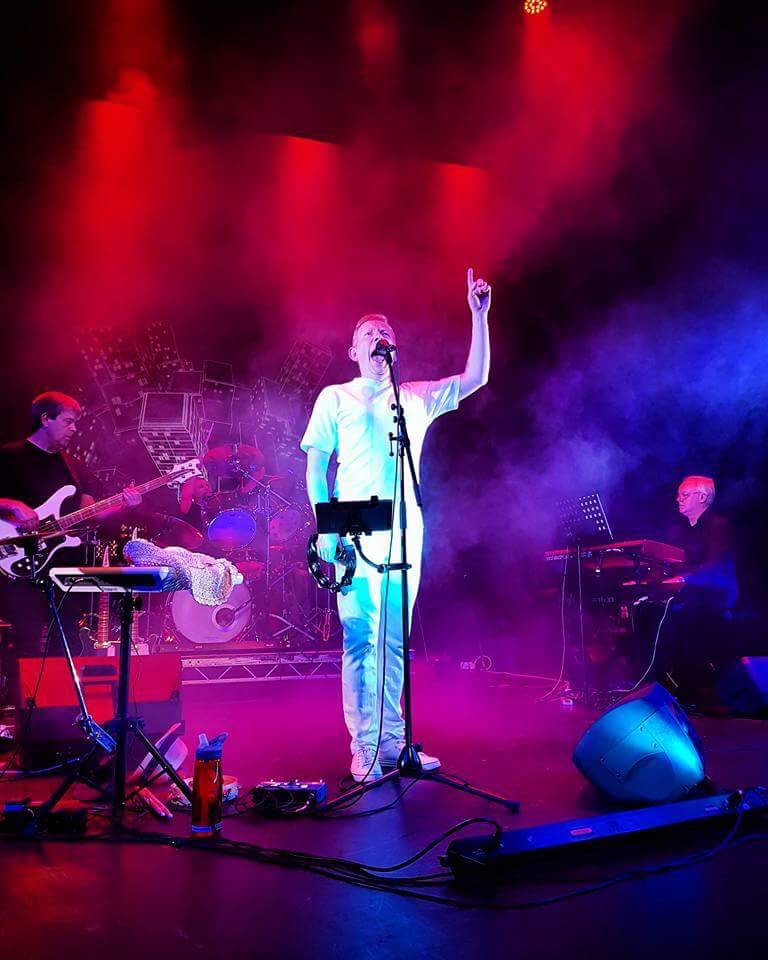 Becoming the lead vocalist for Nursery Cryme back in 2016 was a departure, having been behind the instruments for most of my life – keys, drums, a little guitar and (way back when) Oboe, to the dizzy heights of grade 3 (noting that at the time, there were no grades 1 or 2 for the instrument).

At school, a couple of friends and I formed a band Barock – our influences being, amongst others, George F.W. Handel, and Rush. My next regular band, decades later, was a Funk band called In The Groove, from 2010-12 (just before Daft Punk came out with Get Lucky; I like to think we inspired them…). In the meantime, over the years I have performed at countless events, sung in a couple of musicals, and acted as a reserve keyboard player for the band of singer songwriter Noel Richards.

Thinking I might go into music full-time, I spent a year out early in my career earning a Diploma in Recording, Music Technology and Music Business Studies from Kingston University. Although I came top in the year, it didn’t lead to the career as a record producer I was looking for; the Internet arrived while I was doing the course, and being a computer scientist was suddenly cool, so my gainful employment took a different direction. In the meantime I continued to be involved with music as a hobby, with occasional semi-pro engagements.

Genesis is the band I listened to the most when growing up. I became aware of Abacab through a school friend, and when exploring the back catalogue, I became impressed with a band that could variously belt out grooves (albeit impossible to dance to), gentle folk, and complex classical tunes. I also have a particular weakness for the irregular time signatures. The folky lyrics are also more interesting than your average pop song – as well as more challenging to sing, I have since discovered!

Right, then: probably time I went off to learn the flute! 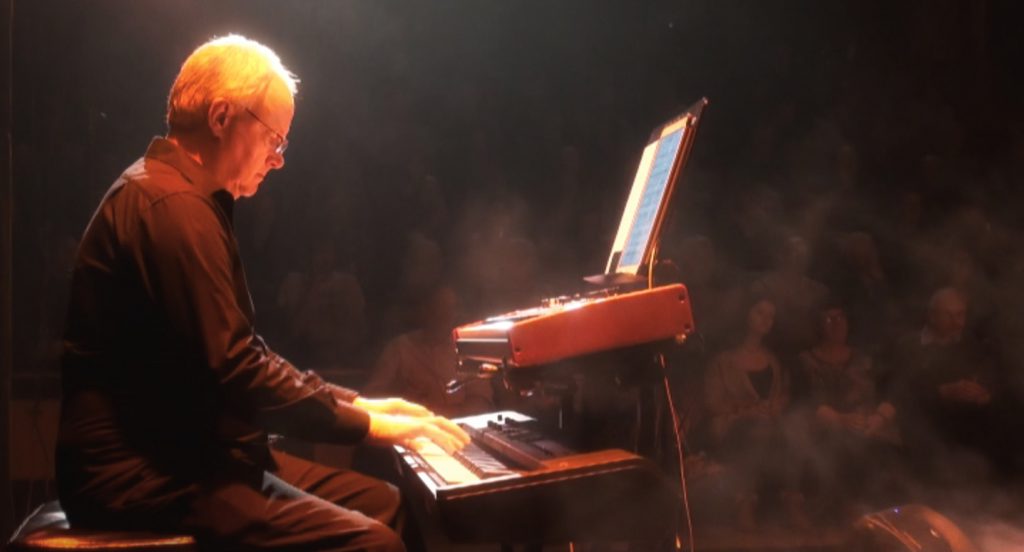 When I was about five, I used to pick out tunes on my parents’ old piano in their front room and a couple of years later was encouraged to take piano lessons which I continued well into my twenties.

Although my early influences were Bach and Chopin, as a teenager I was fascinated by the musicality of Genesis’s Tony Banks, the keyboard wizardry of Rick Wakeman, the technicality of Keith Emerson and the creative artistry of Elton John who unlike the others could sing and play the piano brilliantly at the same time. At various times during the 70s and 80s I found myself trying to emulate all their keyboard styles and this has probably influenced my own natural playing style.

I was introduced to Genesis with their album Selling England By The Pound and having listened to Firth of Fifth I was instantly hooked. Trick of the Tail was the first album of theirs I actually bought followed by the live album Seconds Out . Since joining Nursery Cryme I have also revisited many of their early albums and have discovered some great music, which although being technically difficult and challenging to learn, is great to perform live.

I’m pleased that all our hard work has come to good effect and the feedback we receive at all our gigs is very satisfying. 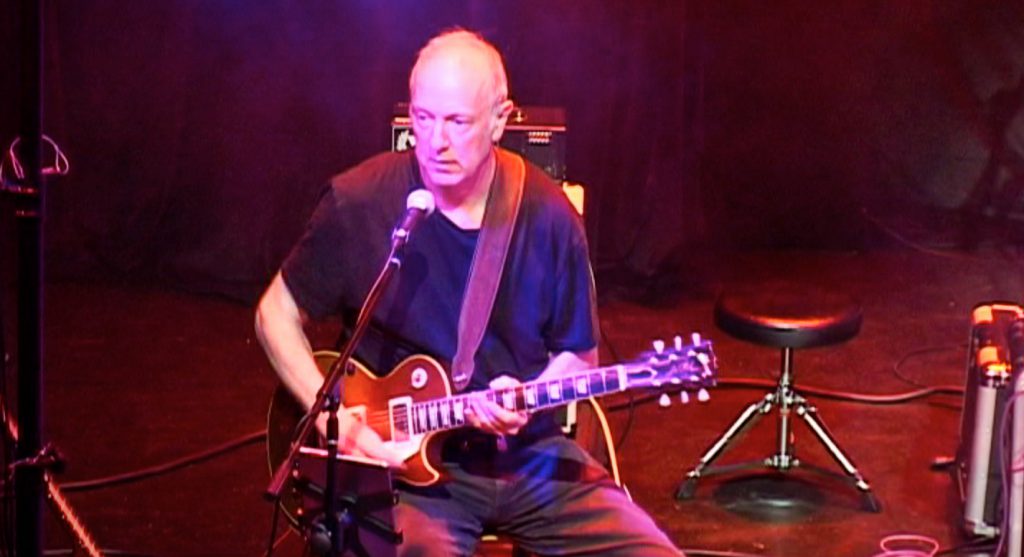 I joined the band in the summer of 2015 when, by chance, I heard Nursery Cryme playing at a rehearsal studio whilst down the corridor massacring some rock standards with a pub rock band.

As a young lad I split my time musically between playing Classical guitar and jumping around my bedroom screaming to Deep Purple and dreaming of being a rock star.

When my version of ‘Tubular Bells’ for 2 Guitars recorded with my mate Brian in his front room, was rejected by Virgin, it became clear the world wasn’t ready for my immense talent, so I decided I’d better get a job instead.

As the years passed my musical tastes evolved to various prog rock bands, especially Genesis, and many years later after a succession of pub bands, by good fortune I found Nursery Cryme. 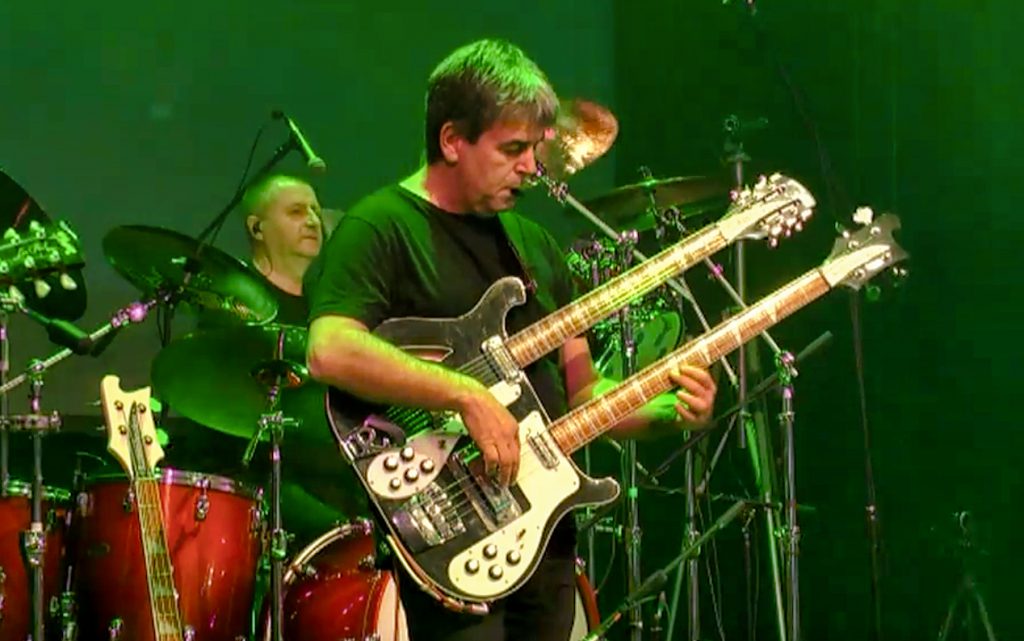 At school I was always that weird geek listening to that odd music that people can’t dance to. After hearing the likes of Jethro Tull, Pink Floyd, Deep Purple and Led Zeppelin filtering out of my elder sister’s bedroom, I started listening to some serious prog rock bands like Yes, Van Der Graaf Generator, King Crimson and a few others.

When my brother brought home two borrowed LPs by this band called Genesis, (The Lamb and Wind and Wuthering), I found them difficult to listen to and couldn’t actually tell that they’re from different eras. However, after listening to them for a while I started enjoying the music and was intrigued to find out more about Genesis, but living in Israel pre-Internet made it challenging.

Undaunted, I used to go to music shops after school and talk to people to try and get as much information as I could. There was one particular tiny shop I came across that would import LPs on order. I seized the moment! I ordered Nursery Cryme and had to wait about 5-6 weeks for it to arrive. The memories of the bus ride back home with the album in my hands sipping every word on the LP cover are amongst the best I’ve had as a teenager. When I got home I put the headphones on, took the LP out of the cover, placed the needle gently on it and 35 years later I still think it’s the perfect music.

I didn’t pick up a bass guitar for the first time until I was nearly 30, playing with a group of friends and then later on joining my first performing band which played mostly originals and a few covers. I learnt that playing live is what I enjoy most. In 2006 I became the second member of a forming Pink Floyd tribute, later known as Echoes, with whom I played around 100 gigs over a 9 year period. Echoes broke up in 2015 which meant I was available to audition for Nursery Cryme, and better still they seemed to like what I do!

Genesis have always been my favourite band so I really look forward to each live gig I play with Nursery Cryme. 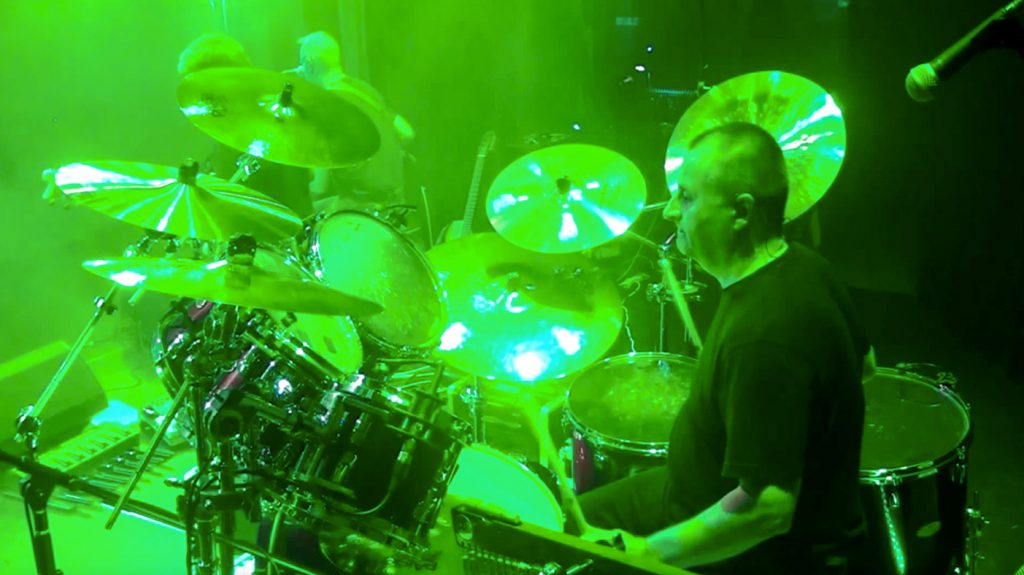 My first love of music started at about 3 years old thanks to Chad Valley and a scratchy old wind-up gramophone that I still have today.

I first started playing drums at the age of 8 years old or so back in the early 70’s, initially playing the air drums to my elder sister’s copy of Nursery Cryme at any opportunity. I loved ‘Harold the Barrel’.

At 14 I started my own band at school, Requiem, which gave me an identity other than being the guy who always comes last in exams. After leaving school I joined a pub band called Catch 22, and had my first recording studio experience in Godalming, Surrey (Charterhouse country!).

My interest in Genesis started on Tuesday evening, May 6th 1980, when Tommy Vance on Radio 1 was broadcasting Genesis Live at the Lyceum in London. As I already mentioned, I loved Harold the Barrel so was keen to hear what other stuff they did. Wow! How did they play those drum grooves? How did they get the changing time signatures so tight? I was in awe and to this day never looked back.

I picked up the sticks again in 2007 and passed some grades (it was good to know how it felt to pass an exam at last) and after joining a couple of bands and gigging again, decided to follow my passion and formed the Genesis tribute band – Nursery Cryme.

I really enjoy being part of a great band and playing alongside such brilliant musicians and now run the band full-time….which is the best job ever! 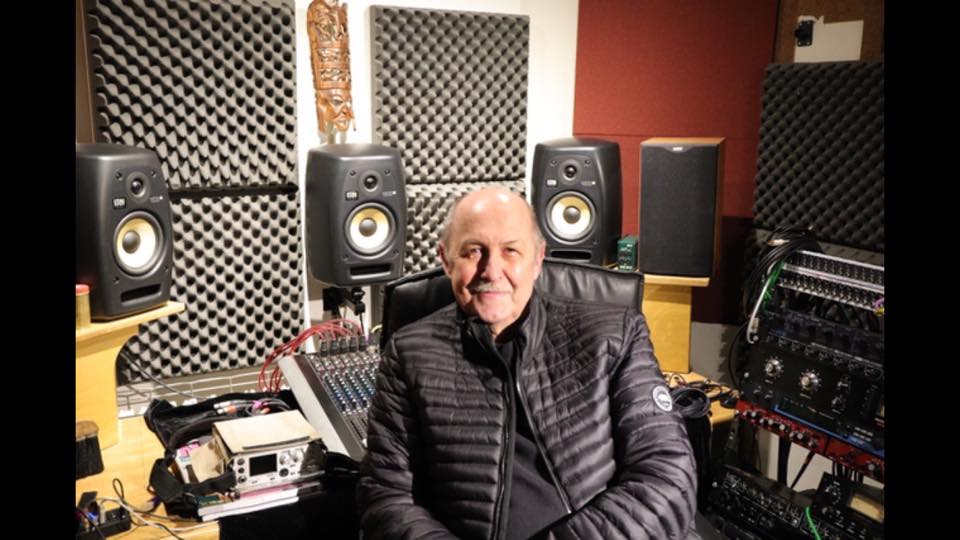 In the early 1970’s I dropped out of Uni to play keys in a touring rock band, Special Brew, and had my first studio experience with them spending a week recording at the great Olympic Studios in Barnes – other bands recording there at the time included the Stones, Focus, The Eagles and Hawkwind – this was, indeed, a studio steeped in rock history.

A magical experience, it had a profound effect on me, and alongside my love for playing and composing music, there developed a second passion for recording and mixing sound.

Balance (in sound) has always been my mantra, and it is most important for our audience to hear clearly the best sound possible in every part of the venue.

I’ve been fortunate to record, mix and produce a variety of musicians and bands over the years; have composed music for several films and TV documentaries; now lecture part-time at Rose Bruford College, and am delighted to be the sound and mixing engineer for Nursery Cryme.

I first got involved in band lighting when, as a teenage apprentice electronics engineer, I bought a small lighting rig from a friend and did a few gigs with local bands in pubs, clubs and colleges. I became the regular lighting engineer for a heavy metal band in the late 70s/early 80s and even did a few short tours with them supporting the likes of Black Sabbath, Motorhead and Iron Maiden! I then settled down to regular work, getting married and having a family so thought that was it for me and working with bands.

A few years ago I had an invite from a friend (Chris Salt) to go and see the new Genesis tribute band he was playing in and they really blew me away and brought back many happy memories. I also DJ for weddings, parties and dance events so had started to get back into stage lighting, although the technology had moved on considerably since my previous escapades. I originally did a stint as NC’s sound technician but when the chance came up to be their lighting techie I couldn’t refuse. The chance to express my creative side was too good an offer to turn down and jumped at it.